All chemical reactions are divided into two families: acid-base and redox ones. The latter are characterized by electron(s) transfer between reagents. Such relations usually release a lot of energy and are hard to control – they are violent and complete. Use of strong oxidizers or reducers for reaction may result in spectacular explosion with an associated release of heat, light, sound effects and a shock wave. For instance, the largest conventional bombs used by the U.S. military, capable of crushing ten-meter layers of concrete, contain just two substances: ammonium nitrate as an oxidizer and metallic aluminum as reducing agent. However, neither of those is considered an extremely potent redox reagent! To illustrate the power of redox reactions, one may consider a process taking place between cesium and fluorine atoms, yielding crystalline cesium fluoride. Imagine that our Universe (which contains ca. 1082 atoms) is composed of an equal mixture of Cs and F atoms only. It turns out that after the said reaction not even one atom of Cs or F would be left unreacted – the reaction would be complete in mathematical sense. Because redox reactions are not partial, one may write the corresponding reaction equations as, e.g.:

In that reaction, A and B reagents have exchanged precisely one electron.

Completeness of redox reactions allows one to assign so-called formal oxidation states to chemical elements in chemical compounds. Here, the corresponding values are +1 for cesium and –1 for fluorine in crystalline CsF. This scheme allows for classification of compounds particularly for those elements which may adopt several different oxidation states. This brings some order into the set of million known chemical compounds, and helps to understand and teach chemistry.

However, a narrow group of very interesting compounds exists, where one cannot assign an integer number to an oxidation state of one or more constituting elements. This is exemplified by doped compounds in which a non-integer addition of an element has been introduced to the chemical formula (we call such compounds nonstoichiometric). E.g., in a compound containing lanthanum, barium, copper and oxygen, La2–dBadCuO4, where doping level d may change between 0 and 1, the formal oxidation state of copper equals 2+d i.e. it may vary in a continuous way from +2 to +3. In systems of this kind the physicochemical properties crucially depend on d. Here:

– for d=0 the compound shows very strong magnetic ordering and it is an electrical insulator;

– for d=0.05 compound does not show magnetic ordering and remains an electrical insulator;

– for d=0.35 the compound is a metal i.e. it conducts electric current well;

– while for intermediate value d=0.16 the compound is a superconductor i.e. it conducts electric current with no resistance at all, and it has peculiar magnetic properties.

Example of La2–dBadCuO4 shows that small modifications of chemical constitution lead to extremely different properties. That is why such systems are eagerly studied by scientists and they are immensely useful for high technologies. Their discovery and applications have caused already several major civilizational breakthroughs during the last three quarters of a century:

Many more examples could be given.

It is not surprising that several Nobel Prizes were awarded for discoveries of these compounds, for studies of associated new physical phenomena, and for construction of useful devices based on them.

Regretfully, doped nonstoichiometric compounds constitute a minority among millions known chemical systems. And there has been no general simple method around which would allow to produce doped systems. The super-strong oxidizers and reducers are particularly unsusceptible to form doped compounds. The problem has remained unsolved… up until now.

In a recent paper, two Polish chemists from the Center of New Technologies, University of Warsaw, Dr, Adam Grzelak and Prof. Wojciech Grochala, in collaboration with an Italian physicist of Argentinian origin from the La Sapienza University of Rome and CNR, Dr. José Lorenzana, have shown (using computational modelling) how a controlled doping of chemical compounds could be performed. Moreover, the new method allows for doping while keeping integer stoichiometry. To demonstrate their idea, scientists have chosen fluoride of divalent silver, AgF2. This compound is an extremely reactive super-strong oxidizer and fluorinating agent (Fig.1). It has been used e.g. in the Manhattan project during World War II, which led to the construction of the first atomic bomb. This important compound has been intensely studied during the last two decades but so far it has resisted all attempts of doping.

Fig.1. Example of vigorous chemical reaction using AgF2 (dark powder at the bottom) and quite inert SiCl4 (instilled drop by drop from the top). Reaction progress from left to right. 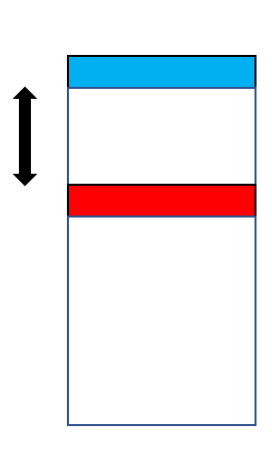 Fig.2. General scheme of a novel charge-injection setup using oxidizer (AgF2, blue) and reducer (MgO, red), and a redox-inert separator of controlled thickness; everything is placed on an appropriate substrate.

„We have suggested to use nanotechnology, i.e. a layer-by-layer growth of particular compounds on an appropriate substrate. It is crucial that the oxidizer, AgF2, is placed at a certain distance from the reducer, with a redox-inert separator (Fig.2)” – says Prof. Wojciech Grochala, who designed the setup. The system may be additionally modified by placing a protective top layer. Here, magnesium oxide, MgO, has been used as a reducing agent. Spatial separation is controlled by using a given number of layers of the separator.

„The calculations have shown that the degree of electron transfer, d, grows with a decreasing separation of reagents. Thus, both layers are doped simultaneously, one with electrons and the other with holes” – explains Dr. Adam Grzelak, who conducted the calculations. Transfer of non-integer number of electrons per stoichiometric unit is always observed. This corresponds to an atypical chemical reaction which may be written as:

where d may change depending on the aforementioned conditions.

The new layered setup seems to be a hybrid of an electrochemical cell (battery) and a capacitor. „Indeed, this nano-device can be well described by the formula resembling that for charge accumulated in the capacitor. However, in place of electric voltage, one must use the difference of chemical potentials of reagents, just like for a battery” – adds Dr. José Lorenzana, who derived the formula.

“I am immensely glad that we have done something very general. The new setup may be generalized to a vast body of inorganic and organic chemical compounds and it opens the door to a multitude of potential applications” – says prof. Grochala.

Time will tell whether new doped devices could be produced in the laboratory.

Paper entitled „Separation-controlled redox reactions” appeared online in a prime weekly Angew. Chem. Int. Ed. Engl. Research in Poland has been financed from the National Science Center within the Maestro project. The calculations were carried out using the okeanos supercomputer at the Interdisciplinary Center for Mathematical and Computational Modeling of the University of Warsaw.